Paradise Park and the JungleBarn are open from 10am every day. Closing times do vary from summer to winter. Please check this page for details.

Events and things to do throughout the year including Easter Egg Hunts, summer flying displays, Quiz trails around the Park, Halloween Disco and more.

The gardens are designed to complement the exotic wildlife at Paradise Park, and to provide plenty of nectar for native pollinators.

Make it a birthday to remember with your choice of four themed party rooms with the birthday child’s name displayed on the door.

Parrots are intelligent, charismatic and beautiful, but sensitive and demanding – as pets they are a BIG responsibility!

Operation Chough is a conservation project established at Paradise Park, in Hayle, Cornwall in 1987.

In February 2013 a pioneering project to save critically endangered Blue-throated Macaws entered an important phase with return of macaws to their home country.
(Please see update link at the bottom)

Santa Cruz de la Sierra (BOLIVIA)
A group of six rare macaws travelled from Paradise Park in Cornwall, UK to Bolivia, as part of an international project to breed and restore wild populations of the species in the country.  The birds had been raised specifically for this purpose at Paradise Park, to support a 10-year long project led by the World Parrot Trust (WPT).

Paradise Park Director Alison Hales explains, “Blue-throated Macaws have a very small wild population believed to be around 110 – 130 individuals, so they are critically endangered in the wild.

This is a long-term project for us. We have been breeding Blue-throated Macaws at the Park for many years. During this time we have also been supporting the work of the WPT team out in the field in Bolivia. It took a lot of planning from our dedicated teams to reach this point.”

Since 2002, the focus of WPT’s fieldwork has been to protect and support the few remaining nesting pairs to aid the species’ long-term survival. The project, led by biologist Dr. Igor Berkunsky, is a complex conservation program that combines intensive hands-on management of eggs and chicks, surveys of remaining wild populations, research into habitat use and status, and outreach efforts with local and national groups. 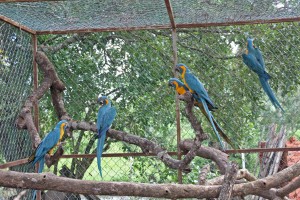 Six young macaws made the journey from Cornwall to Bolivia, travelling with WPT field worker José Antonio Diaz to the country where their species originated to be released back into areas of suitable habitat where they have been extinct for many years.

Alison Hales continues ” The charity based at Paradise Park has been working with the small wild population (around 130 birds) for ten years (up to 2013), but despite all kinds of support such as artificial nest boxes and supplementary feeding of chicks, the overall number is not growing. The great thing about this area of Bolivia is that there is a lot of good habitat, but thousands of the parrots were trapped and sold as pets in the 1970s and 80s. So, a release project will help a great deal in building up a new population. It is really exciting for us at the Park to be so closely involved with this, although emotions were high when they left on their long journey via Heathrow and Madrid.

The birds have settled in really well. As well as foods they were already familiar with in the UK, natural wild foods are put into their aviary every day, with Motacu Palm fruits the most important for them to recognise as the best local source of food.”